"Who does not know the past,
is not prepared for the future." Jürgen Schmidt

The uppers maker is probably one of the least known occupations. "Daddy and mom make half shoes," was the response of our children when they were approached in the parenting profession, because no one could relate to the term uppers maker. Uppers are the tops of shoes, ie about 90% of the visible part of a shoe at first sight. In fact, one could say that a uppers maker tailors dresses for the feet. Like a tailor, he makes patterns according to the dimensions of his feet, cuts leather and fabrics, and sews them together into a three-dimensional structure. He has to be extremely precise. The size difference between two shoe sizes is only 6.67mm. A single upper consists of many elements, and if only four small flaws with an inaccuracy of only about 1mm creep in when modeling, cutting or assembling the many parts, the upper is half a shoe size too small or too big in the end. In addition, the different leathers have very different properties, are sometimes softer and sometimes more solid. This, too, has to be taken into account by the uppers maker, so that the wearer of the shoes will enjoy his handmade shoes for a long time. There is not a second attempt with leather as with fabric. Once sewed, the sewing needle leaves holes in the expensive leather.

Shoe uppers were completely hand-sewn until about 1860. The introduction of the sewing machine in the second half of the 19th century quickly led to the industrial production of shoes in factories. Factory made shoes had the advantage that they were immediately available and customers could choose from many materials.

Shoemakers now had to produce faster and buy more and more different leathers and fabrics to survive the shoe factories. However, a large selection of materials is very expensive for a small shoemaker and the new sewing machines used to be priceless to many. As a result, it came to the founding of uppers makers, who specialized in the production of shoe upper parts.

The wars of the 20th century caused tens of thousands of people to become invalids. Many of them had injuries on their feet and legs. The orthopaedic shoe makers were challenged and the demand for uppers for orthopedic footwear increased enormously. This led to many new foundations of uppers makers. Unfortunately this didn't lead to the situation that the upper makes was given a specific job profile. In vain uppers makers have called again and again the right to train. Nevertheless, the uppers makers managed to get their own job profile only in Austria. Thus, it has been and still is very difficult to train qualified young talent in Germany.

At the end of the eighties and the beginning of the nineties, the introduction of semi-industrial "ready-made stocks" led to the closure of many shops. In some cases sales fell by 70%. The BSE crisis led to an increase in the price of leather, at the same time, the pressure of health insurance on the prices rose. Uppers makers came between hammer and anvil. In 2015, there were only about 10% of the stores left compared to 1980. Some of the surviving garages invested in expensive, modern digital technology to produce more efficiently and cost-effectively. Others reduced production and continue to work traditionally purely by hand.

Nowadays, the outsourcing of the complete production of orthopedic shoes (upper and floor construction) to low-wage countries is the greatest threat to the construction of the upper. For every "ground" that is built far away from Germany, you do not need a upper made locally. There is a danger that the last grown supply structures of local shops, leather dealers, tool manufacturers ... will be permanently lost. 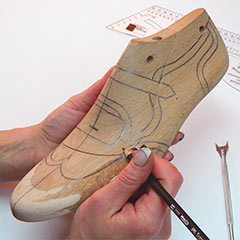 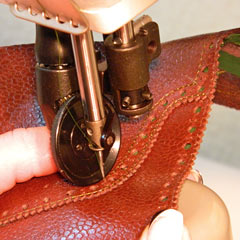 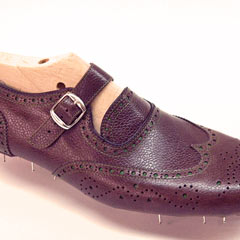 On request, we offer in-house workshops and intensive courses for uppers to small groups of four participants. You acquire a basic understanding and exercise basic steps in making uppers. Since 2011 we have been teaching the master students of the orthopaedic shoe technique in producing uppers at the Chamber of Commerce in Düsseldorf.

Do you have any questions regarding the production of high-quality uppers or to solve a difficult orthopaedic problem? Do not hesitate to contact us.

Our customers will take very long pleasure in shoes with our uppers. We do not only offer quality, but also an overall concept. We set a high value on the sustainable development of all our production steps as well as of all production stages of our suppliers. From the breeding and keeping of animals, through leather selection to tanner and dyeing techniques.

"Experience, quality and precision are the basis of valuable customisation."